One of the great things about working at a start-up is meeting passionate people. My gig is no exception, as there are so many colorful personalities here. My jaw dropped to the floor when Kevin Wojkovich brought his Atreus keyboard to the office. I mean I myself was sporting a Goldtouch Go!2, but Kevin’s beauty was simply on another level. I asked him about it, and little did I know that this would be a beginning of a very fun, but expensive hobby for me. 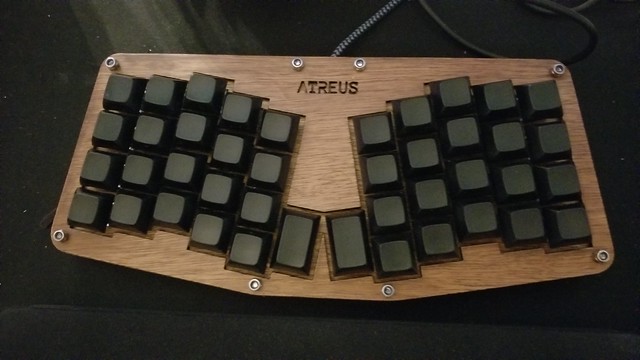 Kevin opened a whole new world to me. He introduced me to the ortholinear key layout, and showed me his other keyboard - the Infinity ErgoDox - which he built from a kit.

After a few weeks of intensive research, I finally decided to take a plunge. Since it would be my very first mechanical keyboard, I reckoned I should skip the whole soldering part and just purchase a pre-made product. My choice was the ErgoDox EZ. I went with the white, tilted model, with backlit keys in cubic profile.

In addition to the rather classic Kailh brown switches, I purchased a small set of Kailh thick gold speed switches. They are super fun and emit a crisp, high-pitched click on the down- and up-stroke. I use them for all the modifiers. Now my co-workers can really hear my enters and backspaces ☻.

The folks at ErgoDox EZ really make customization a breeze. Switches are hot-swappable, so no soldering required. There are also thousands of keycap options. I couldn’t help myself and ordered a few color keys from eBay, AliExpress and Flashquark.

ErgoDox is all about customization - it supports up to 32 layers, and every single key is programmable. I devised my own layout based on my preferences and habits. I especially like that there’s ability to change backlight of individual keys based on a layer. For example, I highlight all the numeric keys on my num layer. Same with function keys. Very useful feature!

It took me a while to get used to the ortholinear layout, but nowadays I am as productive as ever. Having the two halves spread out improves my posture, and minimizes shoulder strain.

During the first few weeks of usage, I found myself constantly glancing down and searching for appropriate keys. Needless to say, it was very counterproductive. I also would get headaches from moving my eyes from one half of the keyboard to the other. To mitigate this, I decided to get rid of labels on keys altogether. Flashquark had a good deal, so I purchased a set of translucent DSA keycaps. I actually like that profile much better, as the keys are shorter and easier for me to press. Transparent keys forced me to just embrace my inner typist and now I never look at the keyboard (unless to mess with cool animations, that is (ﾉ◕ヮ◕)ﾉ*:･ﾟ✧).

It’s nice to have a cool keyboard at the office, but what about those times when I work from home? Sounds like a perfect excuse to purchase yet another mech! This time around I went with ErgoDox "Hot Dox" by Alpaca keyboards. No backlight, no tilting, but still hot-swappable switches and way cheaper! 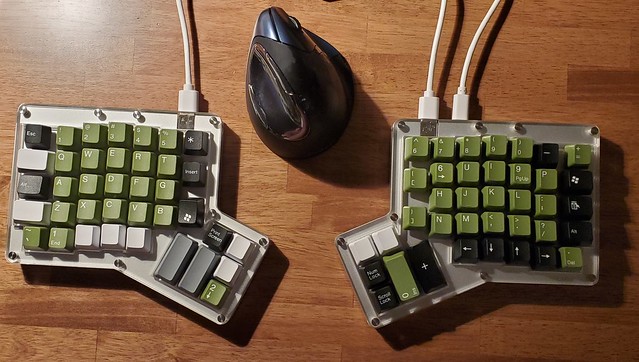 I’m using red linear switches for the alphas, thick gold for common modifiers, and white for the remaining modifier keys. It’s actually surprising how different each kind of switch feels! The whites are especially difficult to accidently press. Some day I will get a more stylish set of keycaps, but for the time being I’m stuck with the camo look.